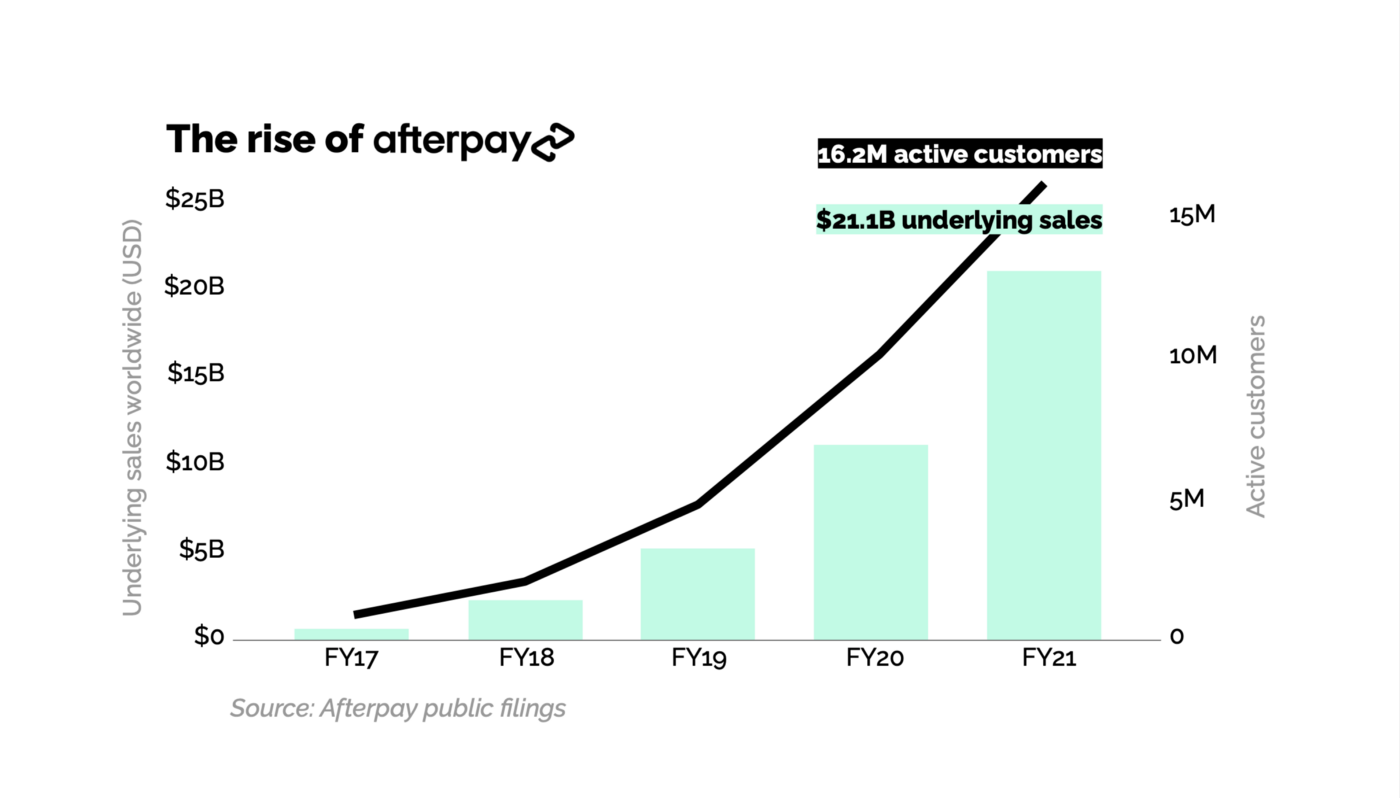 Congratulations to Afterpay and Square

Dana Stalder
Aug 2, 2021
This is some text inside of a div block.
min read

Dana Stalder
Aug 2, 2021
This is some text inside of a div block.
min read

Afterpay has announced a definitive agreement to join Square, forming one of the most exciting companies in FinTech. Here at Matrix Partners, we’ve been fortunate enough to be part of the amazing Afterpay journey. As Afterpay’s only institutional venture investor, we’ve witnessed the insight, ingenuity and grit of founders Nick Molnar and Anthony Eisen, as well as their whole team, and all that they’ve poured into creating a new category and global phenomenon: Buy Now, Pay Later (BNPL).

While thrilling, Afterpay’s rise has not been surprising to our team. Matrix tracked the maturation of the burgeoning FinTech sector for many years before officially launching the Matrix FinTech Index at the close of 2017 to share our worldview of how the space is evolving. It was not long until our January 2018 bet on a small Australian company, Afterpay. We knew back then that Nick and Anthony were onto something big and that it was a global idea, not just for Down Under.

Now, with this merger, we are seeing additional predictions play out. In our 2021 report on the Matrix FinTech Index, we made the claim that this would be the biggest year on record for liquidity events in FinTech. We also stated: “In 2021, we believe BNPL — both horizontal and vertical solutions — will cross the chasm to become a mainstream consumer choice, eventually displacing part of the role of credit card debt.” As Afterpay joins Square, we fully expect this to come to fruition.

Given this as a backdrop, I wanted to share a few thoughts about exactly how Afterpay has been able to create a new FinTech category and what Square + Afterpay will be able to do.

Every 5–10 years, the global payments industry undergoes a critical innovation cycle. That cycle determines the winners and losers for the next several decades. The last major transition was the shift to NFC-based mobile payments, which I wrote about in 2015. The major mobile OS vendors (Apple and Google) cemented their position in the global payments stack by deftly bridging the needs of the networks (Visa, Mastercard, etc.) and consumers, by way of the mobile devices in their pockets.

Afterpay sparked the next great innovation cycle. Conceived in a living room in Sydney by a Millennial, Nick Molnar, for Millennials, Afterpay had a key insight: Millennials don’t like credit.

Afterpay had a key insight: Millennials don’t like credit.

Millennial consumers came of age during the global mortgage crisis of 2008. As young adults, they watched their friends and family lose their homes by over-extending on mortgage debt, bolstering their already lower trust for banks than any generation before them. They also have record levels of student debt. Therefore, it’s no surprise that Millennials (and Gen Z right behind them) strongly prefer debit cards over credit cards.

But it’s one thing to recognize the paradigm shift; it’s another to do something about it. Nick and Anthony did something, ultimately building one of the fastest-growing payments startups in history on their core product: Buy Now, Pay Later…and never any interest.

Afterpay’s product is simple. If you have $100 in your cart and choose to pay with Afterpay, they’ll charge your bank card (typically a debit card) $25 every two weeks in four installments. No interest, no revolving debt, and no fees for on time payments. For the Millennial consumer, this meant they could get the primary benefit of a credit card (the ability to pay later) with their debit card, without the need to worry about all the bad things that come with credit cards — high interest rates and revolving debt. All upside, no downside. Who could resist? For the early merchants, virtually all of whom relied on Millennials as their key growth segment, they got a fair trade: pay a small fee above payment processing to Afterpay, get significantly higher average order values and conversions to purchase. It was a win-win proposition and, with lots of execution, a new payment network was born.

Imitation Is the Greatest Form of Flattery

Afterpay went somewhat unnoticed outside Australia in 2016 and 2017, but once they came to the United States in 2018 and built a U.S. business that broke $100M net revenues in only its second year, others paid attention. Klarna, who had struggled with product-market fit in the U.S., pivoted their business to emulate Afterpay. Affirm, who had always been about traditional credit — generating a significant portion of their revenue from consumer interest — also noticed and introduced their own BNPL offering. Then came PayPal with “Pay in 4” and, just a few weeks ago, it leaked that Apple is expected to enter the space. Afterpay created a global phenomenon that has now become a category embraced by mainstream players across the industry — a category that is on track to take a meaningful share of global retail payments over the next decade.

Afterpay has always been the BNPL leader by virtually every measure, and they’ve done it by staying true to their customer’s needs. They are simply best at understanding the Millennial and GenZ consumer. It’s evident in the voice, tone and lifestyle brand you experience as an Afterpay user. It’s evident in the merchant network they continue to strategically build out. It’s evident in the simple fact that they don’t try to cross sell users revolving debt products. Most importantly, it’s evident in the usage metrics relative to competition. This is a product that people love, use and have come to rely on, all with better, fairer terms than were ever available to them with traditional consumer credit.

I’ve been building payment companies for over 15 years now, initially in the early days of PayPal and more recently as a venture investor at Matrix Partners. I’ve never seen a combination that has such potential to deliver extraordinary value to both consumers and merchants. Even more so than eBay + PayPal.

Together, Afterpay and Square have the potential to build one of the world’s most important payments networks. Through its constant product innovation, Square has built both a very significant merchant payment network and, via Cash App, a thriving high-growth consumer payment service. However, these two lines of business have historically not been integrated.

Together, Square and Afterpay will be able to weave all of these services together into a single integrated experience. Afterpay and Cash App each have double-digit millions of consumers, and Square’s seller ecosystem and Afterpay’s merchant network both do double-digit billions of payment volume per year. From the offline register to the online checkout flow to sending money to a friend in just a few taps, Square and Afterpay will tell a complete story of next-generation economic empowerment.

Square and Afterpay share a vision of a future with more opportunity and fewer economic hurdles for all.

Beyond the clear product and network complementarity, though, what’s most exciting to me about this merger is the alignment of values and culture. Square and Afterpay share a vision of a future with more opportunity and fewer economic hurdles for all. As they build toward that future together, I’m confident that this combination is a winner for all. Square and Afterpay together will become the world’s next generation payment provider.

Congratulations to Square and Afterpay! We at Matrix can’t wait to see all that you accomplish, and we are honored to have been part of this journey.

MORE FROM VIEWPOINTS
Going with the grain of generativity—prompts for B2B SaaS founders
Diana Berlin
October 12, 2022